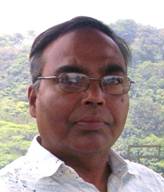 Dr. D.N. Rao, born in the year 1951. Obtained his M.Sc. (1972) and Ph.D (1978) degrees.  After his doctoral degree, he joined as a Research Officer at All India Institute of Medical Sciences, New Delhi and subsequently became a lecturer in the Department of Biochemistry AIIMS,.  Presently, he is a Professor & Head in the Department of Biochemistry, AIIMS.  He was the elected General Secretary of Indian Immunology Society and Vice President of FIMSA during the year 2010-14.  Currently, he is the elected president of Indian Immunology Society. He is recipient of AIIMS Excellence award Ist Prize 2012 awarded by Dr. Robert Huber (Noble Laureat). He is Chairman of the Intramural Research project of AIIMS. He is the reviewer for many National and International journals.  He is recipent of Dr. Pran Nath Chhuttani Oration award 2013 by National Academy of Medical Sciences. He is the recipient of Dr. Sohail Ahmed Oration Award by National Academy of Biomedical Sciences 2014

He is an Editor in Chief of “Indian Journal of Clinical Biochemistry” (IJCB) for about five years. He has received a large number of Awards/oration for his contribution in Biochemistry and Immunology. He is recipient of Prof. B.K. Aikat Oration Award of ICMR for Contribution in Tropical Diseases, 1993; Prof. V.M. Thakor Award for contribution in the field of Biochemistry by Institute of Medical Technology, Udhna (Surat) under the aegis of Span Research Center, 1998; Dr. K.C. Kandhari memorial Oration for contribution in leprosy by AIIMS 1998; Seth GS Medical College & KEM Hospital Oration by ACBI, 1998; Chaturvedin Ghanshyam Das Jaigopal Award for Immunology 1997 by ICMR; Hari Om Ashram Alembic Research Award-2000 Basic Research in Medical Science by MCI; Professor C.R. Krishna Murthi Lecture Award by SBC during 2002; Dr. & Mrs. G.P. Talwar Oration Award 2003 by ACBI; ICMR award for contribution in Biomedical Research 2006 for developing subunit vaccine in Nano Particles, Man of year by American Biographical Institute of USA-2002, Outstanding Scientist Worldwide-2007 by IBC.

Dr. D.N. Rao is currently involved in teaching Biochemistry and Immunology to various professional courses. His research interest includes Biochemistry and Immunology of infectious diseases. His citation spans developing peptide based immunogens for vaccine design and immuno-diagnostics for diseases like Malaria, HIV, and Plague. His interest also lies in immunology of leprosy. He has guided a large number of students for Ph.D, M.D. and M.Sc degrees. He has generated extramural research grants from DST, DBT, ICMR, DAE, DRDO, CSIR and Ministry of Health and Family Welfare. He reviewed large number of manuscripts of Immunology and Biochemistry published in various international/national journals. He is Officer-in-Charge of both Small Animal and Primate Research Facility. He has attended all the three FIMSA conferences with bursary.

He has published more than 130 research articles in International and National Journals. He has guided 20 Ph.D., M.D. 8, M.Sc. and M. Biotech 20. Currently there are 4 Ph.D. students and four Post Doctoral fellows working with me in various research projects concerned to health problems.