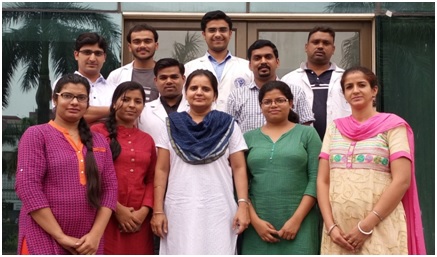 All India Institute of Medical Sciences,

Email Id: This email address is being protected from spambots. You need JavaScript enabled to view it.

PhD in Biochemistry in the year 1994, All India Institute of Medical Sciences, New Delhi.

Masters in Science (M.Sc in Biochemistry) in the year 1987, SIES College, Mumbai

Affiliation: Professor in the Department of Biochemistry, AIIMS, New Delhi

Life member of the following Societies:

Research Focus of the Lab:

Current Research: Immune characterization of HIV-1: The laboratory is focussed on characterizing the immune response elicited in subtype C HIV-1 infected donors and isolation  of cross neutralizing human monoclonal antibodies effective against different subtype C and non-subtype C  HIV-1. Potent broadly neutralizing antibodies (bNAbs) can be useful reagents for passive immunotherapy. Further, the epitopes recognized by these bNAbs can be useful in immunogen design that can be incorporated into vaccines to elicit similar protective neutralizing antibodies in the vaccines.

Prof.Luthra’s research group have isolated a human anti-HIV-1 cross neutralizing V3 monoclonal antibody from subtype C infected donor that has been awarded a patent in South Africa and India.

Prof. Luthra has undertaken collaborative international research projects in an R01 Indo-US project on immune characterization of HIV-1 infected donors. In a recently completed Indo-South Africa collaborative project, her team has generated recombinant human monoclonal scFv antibody fragments against HIV-1 that exhibit good cross neutralizing potential against subtype C and non-subtype C HIV-1 viruses. The epitope specificities of the scFvmonoclonals are being mapped in the lab to identify neutralizing determinants for immunogen design.

Prof. Luthra has worked on the genomic polymorphism of lipoprotein (a) and trained in the latest molecular techniques at the Molecular Biology laboratory of Institute for Medical Biology & Human Genetics, University of Innsbruck, Austria, in 1997 and   transferred the technology in her laboratory at AIIMS. She worked extensively on Lp(a) polymorphism and its association with coronary artery disease (CAD); apolipoprotein E polymorphism and association with CAD and neurological disorders such as Alzheimer’s disease and dementia. This work is extensively published in international journals. For her contribution in this area of lipoprotein research work, she was awarded the prestigious Shakuntala Amir Chand Prize by the Indian Council Medical Research for the year 2003.

Prof. Luthra is an invited reviewer for a number of international and national journals such as PLoS One, BMC Biotechnology, BMC Genetics and a reviewer of grants submitted for funding to international agency such as Wellcome Trust, a number of national agencies such as Biotechnology Industry Research Assistance Council (BIRAC), Department of Biotechnology, Department of Science and Technology, Indian Council of Medical Research and Information Technology Research Academy (ITRA-HuSim). She is an active member of a number of institutional committees such as the Institute Ethics committee for Post Graduate Research (IECPGR), Stem cell committee (IC-SCR), Annual report editing committee etc.

She has been involved actively in organizing a number of scientific national conferences and workshops on Medical education. She is a FAIMER (Foundation of Advanced Medical Education and Research) fellow and is involved as a facilitator in annually training and orienting fresh faculty in the Institute in basic and advanced research techniques. She is a chief guide for a number of PhD, MD, M.Sc (Masters) students in Biochemistry and co-guide of students for their PhD and Masters’ program. She also regularly provides summer training and orients undergraduate Medical students and post graduate students to the research work in her laboratory. Facilitated by her constant support and encouragement, her research students have received international travel grants and regularly attend international symposia such as the Keystone symposia and Summer schools in Immunology and present their original research work at international conferences such as AIDS Vaccine, IAS, Keystone Symposia etc.

List of Lab members (Including technicians and attendants) (In year 2016)

Dr. Lubina Khan has being recently awarded with National Post-Doctoral Fellowship, DST, India and is currently working under Prof. Kalpana Luthra on project entitled “Isolation and characterization of monoclonal antibodies from Memory B cells of HIV-1 infected Indian Individuals”. She has completed her PhD from the same laboratory in January, 2016 and worked on her PhD thesis entitled “Immunological characterization of the HIV-1 clade C envelope glycoprotein (gp160) from Indian patients”.

▪     Got First Prize in Oral Presentation in “Symposium on World Immunology Day” AIIMS.

Mr. Muzamil is a final year PhD student in the Department of Biochemistry at AIIMS, New Delhi. A part of his PhD thesis is to serially assess the humoral immune response against the HIV-1 in infected children in terms of the development of neutralizing antibodies over a period of time. The second part of his thesis is to generate HIV-1 envelope pseudoviruses from infected children and assess the neutralization profiles of sequential pseudoviruses over time and then correlate the neutralization patterns with viral sequence evolution.

Earlier he did his masters in Biochemistry from the University of Kashmir (UOK), Srinagar. He also obtained his MPhil degree from the Department Biochemistry at UOK, Srinagar, where he studied the etiopathogenesis of Esophageal cancer; the most common cancer in the valley, at population level and identified certain genetic and epidemiologic risk factors.

He received the Bill & Melinda Gates Foundation Global Health Travel Award to attend a Keystone Symposia-HIV Vaccine, California, USA. He was awarded AIDS-2016 Scholarship by International AIDS Society to attend AIDS-2016, Durban, South Africa. He got full scholarship from ISHEID-2016, Marseille, France, to attend a meeting on pathogenesis and prevention of HIV.

Ms. Heena is working under the guidance of Prof. Kalpana Luthra as Ph.D student since Feb, 2013. Her study aims at understanding the immunopathogenesis of HIV-1 infection from the infected pediatric individuals. Her Ph.D thesis work is focussed on enumeration of dendritic cell status and modulation of immune response in HIV-1 infected children. She completed her masters in Biochemistry from JamiaHamdard. She has been awarded full scholarship to attend HIV R4P, HIV Research for Prevention 2016: Chicago, USA. She received scholarship from ISHEID-2016, Marseille, France, to attend a meeting on HIV and emerging infectious diseases. She qualified GATE 2013 exam (All India Rank 2), and CSIR NET Dec 2012 exam (AIR-13).

Mr. Sanjeev Kumar is a third year PhD student and working on “Isolation and characterization of human anti-HIV-1 monoclonal antibodies from infected children” as part of his PhD thesis work under the supervision of Prof. Kalpana Luthra since August, 2014-till date.

Earlier, he worked in the same laboratory for his master’s thesis entitled “Generation and characterization of human recombinant single chain variant fragments (scFv) against envelope glycoprotein of subtype-C HIV-1 from pediatric patients” within the period August, 2012-May, 2014.He completed his graduation in B.Sc. (Hons.) Biochemistry from Deshbandhu College, University of Delhi in 2012.He received scholarship to attend the flow cytometry training workshop on “Vaccine design and development” by International AIDS vaccine initiative IAVI held at NIRT, Chennai, India and a scholarship to attend International Science Symposium on HIV and infectious diseases “HIV Science 2014” Chennai India.

Mr. Nitesh Mishra is a first year PhD student currently working in the lab of Dr. Kalpana Luthra. For his PhD, he will be working on characterization of HIV-1 Clade C Env Clones. He is working on another project in which he is looking at association of certain complement proteins in the pathophysiology of coronary artery disease and one clinical trial in which he is looking at impact of probiotics on immune system of newly born children.

He completed his M.Sc. Biochemistry from AIIMS in May 2016. He had done his M.Sc. Thesis titled “Expression of complement receptor 3 and CD46 on dendritic cells of HIV-1 infected antiretroviral naïve and treated individuals” from Dr. Kalpana Luthra’s Lab. He completed his graduation in B.Sc. (H) Biochemistry from University of Delhi in 2014. He recently won second prize in “Young Scientist Oral Presentation” at 5th CME on Clinical Biochemistry at SGRH, New Delhi.

Mr. MadhavMohata is a 5th semester MBBS student currently working along with Mr. Nitesh Mishra on the project entitled ‘Relations of leukocyte membrane complement regulatory proteins with the pathophysiology and severity of coronary artery disease’ and also on a clinical trial of probiotics on its impact on the immunity of the newborns.

Mr. Anil Kumar is working as a Lab Attendent in Dr. K Luthra’s lab in a research project since May, 2003. His nature of duties are like to separate serum from blood samples, packing of tips, autoclaving and sterilization of plastic/glasswares, washing of equipment and cleaning of culture lab. He has completed his 12th standard Delhi in 2013.

Mr. Ajeesh T. Gangadharan is working as a Data Entry Operator in Dr. K Luthra’s lab in a research project since October, 2005. His nature of works are entering and systematically maintain patient data in Excel sheet, to contact and sent written communications for getting quotations for chemicals, preparing supply orders, processing bills, maintaining Accounts of the project, maintaining stock register, compilation of the project reports. He has completed his B.Com from MG University, Kerala in 2002.

Mr. Abdul Wahid Hussain is working as a Lab Technician in Dr. K Luthra’s lab in a research project since January, 2010. He is an expert phlebotomist. His nature of works are cell culture (mammalian and bacterial) media preparation, Buffers preparation etc., PCR, DNA isolation, Patient sample collection, PBMCs isolation, Protein purification, Biological substance distribution to collaborators, Procurement/ordering of chemicals and lab instruments maintenance. He has completed his DMLT from Cochin, Kerala in year 2003.

Mrs. Amrita Sachdeva is working as a Stenographer under Dr. K luthra since December, 2014. She joined Department of Biochemistry, AIIMS, New Delhi in June, 2003. Her nature of works are to take dictations in shorthand and transcribe the official letters, comments on review articles; project proposals, to compile teaching schedules, attend phone calls and coordinate the meetings, help in making ppts for classes and talks of Prof. K Luthra. She has completed her B.A. from University of Delhi in year 1996.